Why I Am Obsessed With P G Wodehouse Writings? 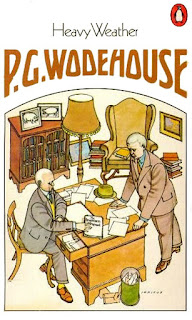 Lynne Truss once had remarked ` You should read Wodehouse when you’re well, and when you’re poorly; when you’re travelling, and when you’re not; when you’re feeling clever, and when you’re utterly dim. Wodehouse always lifts your spirits, no matter how high they happen to be already’ Lynne Truss.
The above statement precisely is the reason why I’m obsessed with PG Wodehouse. He’s for me the greatest writer in English language, not just a humour writer but also one whose writings have hidden truths of life. I have taken this small passage of writing from his book `Heavy Weather’ to drive home, the point I’m trying to make.

Here, you can see how he builds up anticipation to a letter through a paragraph that is bigger than the incriminating letter
It was a brief letter. Its writer’s eighteenth-century ancestors, who believed in filling their twelve sheets when they took pen in hand, would have winced at the sight of it.

Irony could not have been expressed better

But for all its brevity, it had ruined Lord Tilbury’s day
It ran as follows:-

Dear sir,
Enclosed find cheque for the advance you paid me on those reminiscences of mine.

I have been thinking it over, and have decided not to publish them, after all.

Can a grumpy walk by a short man be described better?

He rose from his chair and began to pace the room. Always Napoleonic of aspect, being short, and square and stumpy and about twenty-five pounds overweight, he looked now like a Napoleon taking his morning walk at St. Helena.

Have a look here, how he builds up anticipation on what the reminiscences were all about.

And yet, oddly enough, there were men in England who would have whooped with joy at the sight of that letter. Some of them might even have gone to the length of lighting bonfires and roasting oxen whole for the tenatry about it.

Those few words over that signature would have spread happiness in every county from Cumberland to Cornwall.

Can one of the truths of life, be explained better?

So true is it that in this world everything depends on the point of view.

When some months before, the news had got about that the Hon. Galahad Theepwood, brother of the Earl of Emsworth and as sprightly an old gentleman as was ever thrown out of a Victorian music-hall, was engaged in writing the recollection of his colourful career, as a man about town in the nineties, the shock to the many now highly respectable members of the governing classes who in their hot youth had shared it was severe.

All over the country decorous Dukes, and steady Viscounts, who had once sown wild oats in the society of young Galahad, sat quivering in their slippers at the thought of what long-cupboarded skeletons those Reminiscences might disclose.

They knew their Gally, and their imagination allowed them to picture with crystal clearness the sort of book, he would be likely to produce.

Having a dig at the standard phrases critics!

It would, they felt in their ageing bones, be essentially one of those of which the critics say `A veritable storehouse of diverting anecdote’.

How much more hilarious can any piece of writing get

To not a few – Lord Emsworth’s nearest neighbour, Sir Gregory Parsole – Parsloe of Matchingham Hall, was one of them – it was as if the Recording Angel had suddenly decided to rush into print.

Lord Tilbury, however, had looked on the thing from a different angle. He knew- no man better- what big money there was in this type of literature. The circulation of his nasty little paper, Society Spice, proved that. Even though Percy Pilbeam, its nasty little editor, had handled in his portifolio, and gone off to start a Private Inquiry Agency, it was still a gold-mine.

I decipher this sentence suggests Hon. Galahad knew none of Lord Tilbury dark side during his younger days. This also would suggest that why Lord Tilbury was more than willing to publish his book because in any case, his book would not get published.

He had known Gally in the old days – not intimately, but quite well enough to cause him now to hasten to acquire all rights to the story of his life, sight unseen. It seemed to him that the book could not fail to be the success de scandale of the year.

Email ThisBlogThis!Share to TwitterShare to FacebookShare to Pinterest
Labels: A tribute to PG Wodehouse, pg wodehous, The Cult of PG Wodehous, why i am obsessed with PG Wodehouse Writings, why i love pg wodehouse