My Thoughts on A Feast of Vultures by Josy Joseph 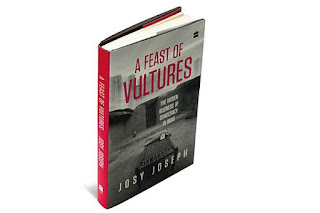 I loved this book just for the brutal and sarcastic way it brings out the underbelly of corruption in India. This book is a must read for anyone who believes corruption can be undone in India. Read this book, and you will be cured of this malady. It lists how corruption is at the core of our lives. This is no review of the book, just reproduction of a few lines I liked the most in the book.

The book begins with a sarcastic punch on Karalla village in Delhi. Read the book to understand the legend of Karalla Village in contemporary history of Indian corruption.

The creaky government machinery moves only when the lubricant bribe is applied.

Instead of dealing with the grievances that fuel these insurgencies, politicians, the mainstream media and security analyst have worked to create an ill-informed, often abusive and intolerant discourse around them.

The state-controlled company that provided the telephone is struggling to survive in one of the most profitable and vibrant telecommunication markets in the world.

The Indian democracy works only through middlemen who know how to get the moribund system moving.

Although the system of intermediaries has not been adequately studied, one can confidently assume that the business of being a middleman between the public and governments is the most flourishing industry in India.

The first chapter `Mr Fix-it Down the Street’ is a chilling reality which every Indian should relate to. The most telling line in this chapter is said by one of the local level leader `We will be important as long as people are afraid of the government, officials and police’

The crux of Chapter 2 `The Mighty Typist’ is covered in the paragraph `The trusted aide’s primary qualification is often just his skill in peacefully, quickly and accurately typing on a QWERTY keyboard. Once he is in the office of a powerful boss, he acquires other skills, such as holding secrets, negotiating on behalf of his boss, reading the boss’s mind and managing various situations for her. These aides usually guard access to the decision maker’s chamber. They pass on messages between those seeking favours and their bosses, often striking deals and collecting the booty on behalf of their employers, occasionally getting a few crumbs of it, and bringing in women or wine as required. They are expected to remain silent, and to carry these secrets to their graves.’

Arms and the Middleman which is the third chapter is the highlight of this book as are Chapter-5 (Battle for the skies), Chapter 6 (Anatomy of a Murder), and Chapter 7 (The Fly-by-Might Operator). These chapters are bound to make you sweat and your hands go cold. If not, you should consider a career in fixing corrupt deals.

Chapter 9 is titled The League of Extraordinary Gentleman but for me it was an appetizer on Crony Capitalism and false CSR .

The author has one defamation suit filed against him in December 2016. What happened to the case is not known? Mr Jossy Joseph has stated that he has based his writings on hard proof that too Government documents. Possibly that explains why the case has gone nowhere.

This is a must read book for anyone wanting to understand the beast called Indian Corruption. Even Harry Potter Fans can read. This depiction of reality should equally intrigue you.

Why Are We Fostering Malicious Media?

Last month I had been to my office headquarters, and took a taxi to reach the office. It was a typical Bengaluru road with potholes and vehicles in the ratio of 1:2. The vehicle was trudging along and a lady from nowhere, as is the wont on our roads, crossed across the road, compelling the driver to hit the brakes. He apologized to me, and I in turn appreciated his swiftness.
After travelling some distance, he said `Sir, If I had not applied the brake in time, she would have been run over, and the IX News would have reported `Drunk Driver driving at 80kms speed runs over a pedestrian’. He spoke like the reporters in such drama news channels.

I laughed, and could have left it at that but I wanted to play with the driver’s thought process. Though I knew the answer, I ventured to ask `How do you know these minute details? Do you regularly see them?’ He replied in the affirmative, and also asserted that he was an avid viewer of such news channels.
Next I proceeded to ask `Do you believe in what is told on such channels?”. Driver `Not always sir, but it is great fun’.
He was now in my grip, and I decided to deliver the killer punch `would it have been fun for you or for your family members, if you had hit the lady, and the channel telecasted such headlines’. He sheepishly said `no’.
I chided him by saying `When your mistake becomes a headline, you will feel hurt but when someone else’s mistake becomes a headline, it’s fun. If you don’t want such headlines telecast about you one day, stop viewing channels that telecast such headlines’. He went numb for the remaining part of the journey.

The purpose of this blog is not political, and I never write on this contentious subject. This is about commonsense. Why do we believe a channel where the anchor thinks he, and his reporters know everything? Why don’t we stop viewing channels where the anchor plays the judge? Why don’t we question the motives of channels which divert attention from the important news with their sensational, salacious, and trivial breaking news? Is it that an individual’s opinion becomes pristine just because he served in a particular organisation? Why do people give leave to their critical thinking, and believe politicians who speak blatant lies?


As long as we cannot add up one and one, we will continue to be mislead by shady media houses and Machiavellian politicians.
- June 11, 2017 1 comment:

What Is The Name Of The Fourth Son