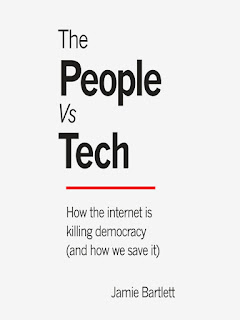 1. The 6 key pillars that make a democracy work  and how technology threatens their existence.
2.  20 suggestions for how democracy machines in order to survive in an era of    ubiquitous intelligent machines, big data and digital public sphere.
3.  Hardly anyone ever read the terms and conditions that    they tick  ,  because they are long and only comprehensible to a contract lawyer with a background in software engineering and one day a week to spare.  A few years ago ,  a British  firm included a clause that asked for permission  to claim now and for evermore,  your Immortal soul and no one bothered.
4.  In the  bowels of every inspirationally branded tech firm  some of the World's smartest Minds    are paid small fortunes to work out why you click on things, and to get you to click on more things.
5.  How addictions to  alcoholism and tobacco are giving way to digital dependency.
6. The scary thing about modern big data algorithms is how they can figure things out about us that we barely know ourselves.
7.  The logical end goal of datausm is for each of us to be reduced to a unique, predictable and target table data.

8..   How in 1890,  Samuel Warren and Louis Brandeis questioned  whether arrival of the camera would put citizens  at risk from constant surveillance.

9..Being always under surveillance and knowing that the things you say are collected and shared creates a soft but constant self censorship.  It may not feel like that when people screaming abuse on Twitter -  but for  every angry troll, there are hundreds of quite users, lurkers who watch but don't post, for fear of the Angry Twitter mob, the data collectors, a nosy employer,   or the hordes of professional offence takers who shark around the net waiting to be upset.  This is damaging to the citizens ability to exercise moral judgement in their lives.

10.   If data  analysits or algorithms understand is better that we do ,  they can manipulate or control us in ways we can't understand or uncover.

11.  How algorithms  just like numbers  aur intoxicating because they appear to be logical and can guide our  thought process.?

12. There is a  proliferation of well meaning apps designed to help you to decide how to vote. You put in your   views and preferences and the machine spits out a party for you.  Nearly 5 million brits have  already used voting app I side with  in multiple elections.  5.5 million people as an app.

13.  How  voters are notoriously bad at knowing even their own preferences,  and how algorithms manipulate the choices.

14.  How Information overload and connectivity has  encouraged a   divisive form of emotional tribal politics,  in which loyalty to the, group anchor outrank reason and compromise.

15.  How the available information is beyond the ability of  of even the most ordered brain to categorise into believable and not believable.

16.  How referendum and digital voting don't actually satesh questions and are extremely divisive because the force people into binaries rather than seeking compromise.
17. Emotional content gets traction online,  in the  form of shares,  retweet,  etc.  than serious and thoughtful comments and stories.
18.  How when exposed to contradictory facts,  stop first become more strongly set in our beliefs.  Interaction on the net is typically Swift,   fleeting,  and emotionally  heightened.  Technology has turbocharged   a  weakness for financial  gains.
19. How internet is used by leaders   who want to become popular by promising easy solutions to complicated questions.
20.  How  the Trump camp as well as Russians used internet  to promote the  the presidential campaign of Donald Trump?
21.    The role of  Cambridge analytica in the election of Trump as president of USA.
22.  How  data relating to  purchase of a Ford car was used to convince the  buyer to vote for Trump?
23.  How elections are becoming datafied?
24.  Who actually wrote many of Donald Trump's Facebook posts!?
25.  How driverless trucks for becoming a reality in USA and their dexterity.
26.  Use of artificial intelligence by legal software firms.
27.  Text forms in the future will control  public opinion  by owning the platforms on which material is published.
28 .  Tech monopolies  are more invidious to democracy  than   Rockefeller or  Carnegie.
29.  Why in future big Tech companies  won't need to lobby or  buyout competitors?
30.  How Crypto anarchy,  Bitcoin, blockchain storage of data might be the only set of ideas that can challenge the check monopolies
31. How it is getting simpler day by day to be a cyber criminal
32.   How overuse of Technology  will gradually   render   governments non functional?
33. Twenty ideas to save democracy.

Email ThisBlogThis!Share to TwitterShare to FacebookShare to Pinterest
Labels: People vs Tech by Jamie Bartlett, Threat to Democracy