The Mystery of Mussoorie - Written For Fun

This piece is written for fun, and not meant to hurt anyone.


When I had left Bengaluru for Dehradun, I had promised my friends and family that weekends are going to be exclusively devoted to trips in and around. It was getting close to one month, except for making trips to the clock tower, The Cross Road Mall and a movie, nothing much happened with weekends in Dehradun.

Last weekend, I decided I am going to turn the first page in my Dehradun travel diary, and hired a taxi to go to Mussoorie, the queen of hills. To ensure that I capture all the moments of the trip, I charged the camera battery on the previous night.

Rainfall in Dehradun means snowfall in Mussoorie heard, the tradition in Dehradun is, as and when there is rainfall, especially during the weekends, is to inform their friends and relatives staying in Delhi and nearby areas of the same. They in turn rush to Mussoorie. Not satisfied with informing their friends and relatives, the Doonians also scamper to Mussoorie. Given that snowfall in Mussoorie happens during winter as often as a traffic jam in Bengaluru, there is no doubt in my mind that most Doonians spend a lot of talk time during weekends informing their relatives about snowfall, and they themselves spend more time in Mussoorie than Dehradun. With all the rush, I presume only the early bird or traveler gets to see the snow. The day I went was a normal wintry day in Mussoorie, devoid of snow fall.

The ascent to Mussoorie did not exactly take place at 4g speed but was swift. There I saw `Mussoorie Library’ which was started in 1843. Mussoorieans must be the most avid readers of books, and no wonder they have a Ruskin Bond to prove it. Just wondering, how many people in 1843 would have come regularly to library in a cold place like Mussoorie? The librarian of those times would have not only known which book each member is reading, also in which page they are in. 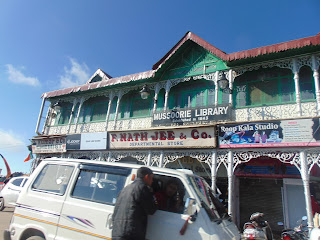 My camera began to find its purpose as the ascent got steeper. A few snaps, and I found that the rechargeable battery of my camera, had become a never again chargeable battery. It is rather surprising that in a tourist area, that were no shops selling batteries. After quite a few kilometers of drive, and missing many a snow capped mountain being subject to my photography skills, I found my redemption in the form of a shop that sold batteries. I wanted to take a snap of the shopkeeper, and post it on Facebook with the caption `the only shopkeeper in Mussoorie who knows the importance of selling batteries in a tourist spot’ but was unsuccessful. Obviously, he was fed up with his Adhaar photograph, and did not want to see a more disgusting one. A small drive down  the  shop  led  us to      ` Kempty Falls’

We had reached `Kempty Falls’. There is a rope car ride in `Kempty Falls’, and after taking it I felt, the guy who came up with this ride, has no clue of what is meant by superfluous. It was like being promised that you will get to date an actress, and all that you get to date is the one who played the dead body in a documentary film on famine. The falls itself is a single drop, the water expectedly was cold, and there was no shortage of selfie seekers. I just wondered if the duck faces they make while taking selfies would look realistic, if a gush of water hit their rears. There is a lake nearby, and to prove my patriotism to Dehradun, I also call it as a lake. A few snaps, and we left `Kempty Falls’, and I had no idea where the driver was taking me to. You can soak in all the excitement of Kempty Falls” in the pictures here
https://wordpress.com/post/baluam.wordpress.com/130

He parked his vehicle in front of `Uttarakhand Textile Development Corporation’. I purchased a Bamboo Sari for my wife, and a couple of Bamboo shirts for myself. I saw something unique in the showroom, Sun Signs based perfumes. It is said to be made from herbs suited for each star. First it was the stones, now it is the perfumes, what next, briefs and vests? 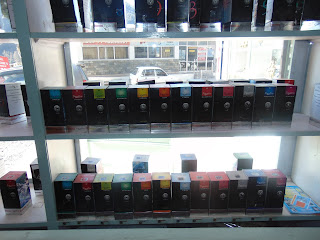 Then the driver stopped for a while to enable me to take snaps of the snow capped mountains. I tried to get the best pictures, and was greatly helped by a good camera, nay my photographic skills. You can see some of them here.
http://balu036.blogspot.in/2017/01/wow-i-saw-snow-in-mussorie.html

Next we headed to the Mall Road. It is a beautiful street which has most things you want, except a beach front and an oasis. The scenic beauty on this stretch is to be seen to be believed. A lot of small shops adorn the street. Based on the advice of a friend of mine, I checked out on Chic Chocolate where I tasted Chili Chocolate, and Agarwal Paratha’s. She had also recommended Inder Sweets, and Lovely Omelette but I could not relish their specialties. Lovely Omelette had a waiting time of 1 hour. I can stand in the Queue for hours to withdraw money from ATM, partially because I need money and more so because soldiers stand in the border for sake of the country. I decided, sorry sir, waiting for an hour for a plate of omelette, is not my plate of omelette.

The return journey commenced. In the late afternoon sun, the scenery was breathtaking. Instead of pulling out my Sony DSC-H300, I decided to soak in the beauty. Next we reached Mussoorie Lake. The walk down is a good exercise to see this lake which is  compact amongst compact sized lakes, but while walking back one feels for all the effort, the lake need not have been that compact. Here are a few badly taken pictures of Mussoorie.
http://balu036.blogspot.in/2017/01/mussorie-you-are-absolute-beauty.html

Soon we left Mussoorie and reached Dehradun. My verdict of Mussoorie is you can go there in the winter to see the snow, in the summer to chill off or even just to enjoy the scenic beauty. It is all about the breathtaking views in Mussoorie, nothing less, nothing more. Mussoorie is a good place to stay, if you’ve some romantic company.
- February 03, 2017