A Few Light Moments From `Heavy Weather' By PG Wodehouse

Can dim wittedness of an individual be better described than this?
Minds like Monty Bodkin’s may not always work at express speed, but they are subject to the same subconscious process as those of more brain-burdened man.

The bizarre tastes of an individual perfectly explained.
From time to time he sniffed sensuously. Elsewhere throughout this fair domain the air was fragrant with the myriad scents of high summer, but not where Lord Emsworth was doing his sniffling. Within a liberal radius of the Empress’s headquarters other scents could not compete. This splendid animal diffused an aroma which was both distinctive and arresting. Attractive, too, if you liked that sort of thing, as Lord Emsworth did

Bad vibes cannot be told more humorously
He trembled. It would have pained the immaculate Monty, could he have known that his prospective employer was picturing him at this moment as a furtive, shifty-eyed, rat-like person of the gangster type, liable at the first opportunity to sneak into the sixes of innocent pigs and plant pineapple bombs in their bran-mash

You should know what to say when
Yes, that’s how I remember him. One of those fellows you can count on to say the wrong thing. Reminds me rather of a man I used to know in the old days called Bagshott. Boko Bagshott, we called him. Took a girl to supper once at the Garden. Supper scarcely concluded when angry old gentleman plunges into the room and starts shaking his fist in Boko’s face. Boko rises with chivalrous gesture `Have no fear, sir. I am a man of honour. I will marry your daughter’ `Daughter’ says old gentleman, foaming at little at the mouth `Damn it, that’s my wife’ Took all Boko’s tact to pass it off, I believe. 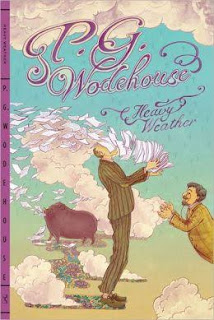