A Few Quotes From `Full Moon' by PG Wodehouse

The Master could have very well named this book as `Full Fun’. This must be one of the funniest works of PG Wodehouse, very difficult to pick the few good ones. I’m re-reading this book. This blog is written for Indiblogger’s Indispire edition number 171 on Favourite Authors

Unlike the rest of the female members of her family, who were tall and stately, Lady Herimone Wedge was short and dumpy and looked like a cook – in her softer moods, a cook well satisfied with her latest soufflé; when stirred to anger, a cook about to give notice; but always a cook of strong character. Neverthless for the eye of love is not affected by externals, it was with courtly devotion that her husband, avoiding the face cream, bent and kissed the top of her boudoir cap. They were a happy and united couple.
Colonel Wedge was exhibiting that slight sheepishness which comes to married men when the names of those whom they themselves esteem highly but of whom they are aware that their wives disapprove crop up in the course of conversation.

Fredie straightened his tie
`The boys generally seem to wish to hear my views’ he admitted modestly
`And I’ll bet they get their wish if you’re within a mile of th
The face that gazed from the picture was not that of a strictly handsome man. It was, indeed, that of one who would have had to receive a considerable number of bisques to make it worth his while to enter even the most minor of beauty contests. The nose was broad, the ears prominent, the chin prognathous. This might, in fact, have been the photograph of a kindly gorilla. Kindly, because even in this amateur snapshot one could discern the pleasant honest and geniality of the eyes.

The body this face surmounted was very large and obviously a man of the finest muscle. The whole, in short, was what a female novelist of the Victorian era would have called a `magnificent ugly man’, and Freddie’s first feeling was a mild wonder that such a person should every have consented to have his photograph taken.

Ever since the tempestuous entry into his life of Prudence Garland, he had been feeling almost without interruption rather as one might imagine a leaf to feel when caught up and whirled about in an autumn gale. Bill’s was essentially a simple, orderly mind. Nature had intended him to be one of those men to whom love, when it comes, comes gently and gradually, progressing in easy stages from the first meeting in rigidly conventional circumstances to the decorous wedding with the ushers showing friends and relatives into the ringside pews. If ever there was a man born to be the morning-coated central figure in a wedding group photograph, it was William Galahad Lister.

The thoughtful soul who built the bar at Barribault’s Hotel constructed the upper half of its door of glass, so that young me about town, coming to slake their thirst, should be able to take a preliminary peeop into its interior and assure themselves that it contained none of their creditors.

Too often, in English country houses, dinner is apt to prove a dull and uninspiring meal. If the ruling classes of the Island kingdom have a fault, it is that they are inclined when at table to sit chomping their food in a glassy eyed silence, doing nothing to promote a feast of reason and a flow of soul. But to-night in the smaller of Blandings Castle’s two dining rooms, a very different not was stuck. One would not be going too far in describing the atmosphere at the board as one of rollicking gaiety. 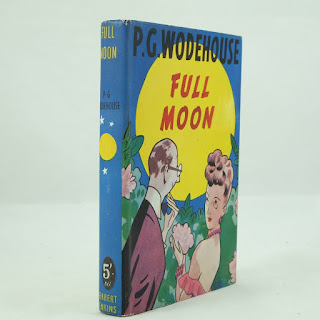