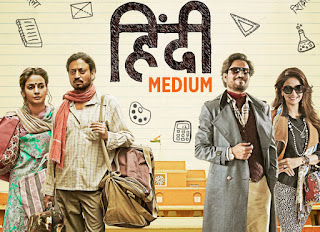 `Hindi Medium’, if it happens for real must be the most amusing roller coaster ride for any family. It is unimaginable to think of a family moving from Old Delhi to Vasanth Vihar to a slum in Delhi, back to Vasant Vihar and finally back to reality.

Before we proceed further, `Hindi Medium’ is remake of a Malayalam film, and the heroine Mita is played by a Pakistani actress. I have no problem with either, especially Saba Qamar who looks a million bucks and a actress par excellence.
HM is a harsh story told well enough to not offend the sentiments of the upper middle class, that is so eager to see their children educated in any Tom, Dick (oh that word might offend someone), school which prefixes it name with Convent or International School. I know of a school in Bengaluru East which does not have enough space to even assemble all its students in the corridor but calls itself as an International School. Wonder what the education authorities are doing about it?
Parents have always an inferiority complex about their own backgrounds especially the schools they studied in, in this case Mita. Mita breaks into a hysteric dialogue everytime she has to explain what will happen if Pia does not get into an English Upmarket School. Her over protectiveness of Pia is comical to say the least.  Propelled by his wife, Raj (Irfan Khan) does everything to get his daughter Pia into an English School. They even move to the upmarket and snobby Vasant Vihar. Neha Dhupia in her role defines Vasant Vihar.
The parents even engage a consultant played by Tillotama Shome . She says when she was introduced to the character; it was described as a "bit of a bitch". Tillotama Shome has portrayed her role more than a bit. Hers is one character which will remain in your mind long after you’ve forgotten many scenes of the movie, but remember its storyline. Image consultants have made criminals look like saviours in the recent past, but that is possible only when the conversation is one sided. However, in a school interview, it is two sided, and the couple of Irfan & Saba (Raj & Mita) get exposed, and Pia does not get the admission.
This failure in the interview compels the couple to take a vacation in Europe at Bharat Nagar slums. Indian parents are always ready to sacrifice for their children’s education, they don’t mind faking as poor to get seats under RTE, and if required, to avoid being detected, ready to stay in a slum as well. Staying in a slum has its own perils but they are able to counter thanks to their friendly neighbours Shyam Prasad & his wife Tulsi. Both Irfan and Saba prove their acting credentials in the slum. First, they land up the seat and later lose it. Amrita Singh portrays the role of  principal of English Grammar School with a finesse that hides her villainy till the last scene.
One scene which transcends the limits of creative freedom is when a SUV knocks down Shyam Prasad, stops and when threatened with police complaint, hands over 20k to Raj. Nobody is going to buy that scene.
Thanks to a scam bust, Pia loses her seat. In a lucky draw, she gets it back, and as again expected, the Raj couple decide to surrender it. It is only then the villainy of Amrita Singh is revealed. Raj breaks into the school auditorium and makes an emotional speech on education in India, and accepting his guilt. Realism in the film is not lost, when the upper middle class present in the auditorium does not react to his emotional outburst, least their wards future is affected.

Overall the film is a refreshing fare compared to BKD and such stuff. The entire starcast has done immense justice to their roles. I would give it a 4 star. It is a week since I saw the movie but tell you what Saba Qamar is a WMD, Woman Made Divinely