How `Coming Out As Dalit' By Yashica Dutt Resonates With My Life? ?

Coming Out As Dalit – A Memoir written by Yashica Dutt is a wonderful book of the authoress who has come out in open with her Dalit identity after years of hiding it. I am not going to review the book. The book has not only been written from the heart but after a lot of research. There are happenings from her personal life, which are also contained in the book, and have a relevance to the problems Dalit societies face. I belong to the Dalit community. What I am going to do is going to pick some lines from the book, and relate it to the happenings in my life.

The authoress in one of the portions of the book states that Dalits who fearlessly come out with their identity offend upper castes the most. She hits the top gear right at the beginning of the book, and there is no slowing down in exposing the caste predators.

It took me almost 25 years of existence to come out with my identity as a Dalit, and after that I too had nothing to hide. The authoress came out with her identity because of Rohit Vehumla, and I did it because I realised that no matter how much of a Hindu I tried to be, I was always a low caste, and in the context of independent India, a freeloader.

Ask any Dalit who has worked for the Government, who was as efficient as his upper-caste peers, with an interest in progressing his career, he will bet his last pie to vouch for this thought.

We are living in the times of lockdown to contain the spread of COVID-19 virus. We are required to wear masks when we come outside to not contract this disease. Dalits will never find this difficult because for the better part of their lives they wear a mask of an upper caste person to avoid being ostracised.

My father was polemical to hiding our caste identity but wanted his children to grow outside the earmarked Dalit areas of Bangalore. To be fair, most house owners never asked us about our caste except one who insisted that we should not cook non-vegetarian food. Our economic condition did not allow us to regularly consume non-vegetarian food, but my parents went heads over heels to comply with this condition. Possibly ashamed of being born as Dalits, my parents avoided all those things that could reveal our caste. Over a period we performed poojas, marriages, funerals, and festivals befitting an upper caste. We were indirectly acknowledging that the Dalit customs were inferior.

How do Dalit legends and ultra-legends hide their caste identities?

Dalits try to hide their caste identities but legends do it by ridiculing Dalits, and even by criticising the move of Babasaheb to provide reservations to Dalits. They even label the acts of successive Governments to extend reservation as a regressive step.

The ultra legends are the ones who say that castes no longer exist in the society. Over the past few years, the Government has made it mandatory to celebrate the birth anniversary of Dr B R Ambedkar in a befitting manner, and the ultra legends who work in Government offices ensure that they don’t turn up for this function.
However, when it comes to claiming reservation in promotion, or quarters allotment, or getting relief from being reprimanded for indifferent work/corruption, or getting medical/engineering seat for children, or BDA residential site allotment, they will swear about their being a dalit on the Manu Smrithi itself.
My brother also works for the Government, and he is a Dalit Ninja Warrior. Wish I could insert a sound clip of him in this blog describing such bilious masqueraders. Many in Government service have used their Dalit identity to get promotions, get elected to lucrative employee cooperative societies, and when they reach the helm trample the Dalits working under them. They are more upper caste than upper-caste themselves.

I prominently display a photograph of Dr BR Ambedkar on my desk ever since I entered Government service. The aforesaid masqueraders have advised me to remove it to avoid the wrath of the management. I did not pay heed to it, and till date my table contains an image of Babasaheb.

Embracing Vegetarianism in to-to or selectively

Between the age of 18 and 24, I had embraced vegetarianism due to a misconception that being a non-vegetarian is imbruing humanity. Having exorcised that belief, I am now a passionate non-vegetarian. Caste Hindus become vegetarians during certain days of the week and select periods of the year. I have no objection to it because it is their belief and they have been conditioned so for ages. Dalits who for ages were maimed, raped and assaulted for entering a place of worship or trying to behave like a caste Hindu, follow these conditions religiously. It does not prick their conscience that even during this period of abstinence Dalits across the country are butchered by upper castes.

Assuming that possessing a flawless English knowledge can hide your Dalit identity.

Three months after I joined my present job, I came to understand that one of the upper caste officers had enquired with my boss whether I could read and write decent English. There have been quite a few uncharitable remarks about my ability to express in English. I don’t claim coruscating English knowledge but these remarks were made against me because I am a Dalit, because we are assumed to be unintelligent. As pointed out by the authoress, Tina Dabi, the daughter of a civil servant couple, is accused of wrongly availing reservation, even though she had scored more marks than general candidates in the main exam. It was only in personality test interview that she did not perform to her potential. The matter of fact is that more often than not when a Dalit commits a mistake in Government service, it will reminisce in closed corridors how reserved candidates are a useless lot and a virus in the system.

My father’s formal education was limited but he had a great passion to better his English. He relentlessly pursued this goal by reading many English books and even consulting my English teacher on some doubts. A relentless pursuit to attain an ability to speak and write English impeccably is part of my genes. It is the only language in which I have an acceptable proficiency.

Anti Reservation Protests in AIIMS during 2006

Mandal Commission Protests was the first big anti-reservation protest I was a witness to. I will reproduce two incidents from those protests which will explain the contemporary hatred against Dalits.

During the protest, I saw a young lady holding a placard `Wanted an SC/ST Groom with a Government Job’. Inter-caste marriage is the best solution for eliminating the caste system. This placard was not an invitation but intimidation of a community trying to assert itself.

During the Mandal Protests, I was pursuing ICWAI course. My friends, a few of them who knew my caste status had warned me not to tell to anybody that I was a Dalit, as if otherwise I was proud about flaunting my Dalit identity. The classes for this course were held in the evenings in a prominent Christian college in Bengaluru. Please excuse me for reproducing this crass graffiti from the Men's Restroom.

At a height, it was written `if you can p**s till this point, you can become a fireman.

At a lower threshold, it was written, this height is enough for SC/ST.

I too laughed it off shamelessly but that graffiti has stuck in my mind as an epitome of the hatred that is present against Dalits.

Dalits were always the despised lot. The contemporary hatred is fuelled by the fact that some of us have escaped the dragnet of caste humiliation thanks to reservations, and a need is felt to prevent further hostages getting away through this method.

The book is well written and must be read by all Dalits who are ashamed of asserting their identity. The Upper Caste would do well to encourage such an assertion. Dalits asserting their identity would mean the end of caste discrimination, and also the ignominious reservation. Once the stain of reservation goes from the face of India, we can look forward to only meritorious doctors, engineers, scientists and administrators. None of the IIT Engineers and Doctors will leave this holy land for foreign shores. This could mark the return of the proverbial `Sone ki Chidiya’. 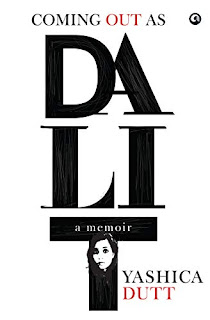 Email ThisBlogThis!Share to TwitterShare to FacebookShare to Pinterest
Labels: Caste Discrimination in India, Coming Out As Dalit, Yashica Dutt