Movies which are carved in my mind 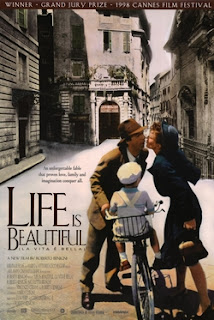 Movies are the best form of entertainment in modern times. They take us into a world of make belief. Movies sometimes create a stir in the society la Rang De Basanti. Here is a list of the movies (Commercial Only) which inspired me, captivated my imagination and of course entertained me.

Movies which inspired me

a. Life is beautiful (English) – A wonderful film about the travails of Jews during World War II. If only everybody could lead their lives the way the main protagonist of the film does, stress would become a non-existent word. Even when he is being taken away to be executed by the Germans, he neither flinches nor makes it known to his young son. His positive attitude is to be seen to be believed.

b. Ramana (Tamil) – This film portrays the fight of a college professor against corruption in the society. How a professor organizes a bunch of his students to kidnap corrupt officials from across the state and finally execute the most corrupt one, forms the crux of the story? I liked the scene in which he traps a dishonest hospital into giving treatment for a dead body. One more highlight of the film is when he makes appeal to the general public not to disturb law and order on his execution.

c. Saving Private Ryan (English) – Two sons of a widow are killed in second world war and a third is fighting the war somewhere in enemy territory. The army sends a small contingent of soldiers to bring him back. The film is to be seen to be believed especially the last few minutes.

d. Lagan (Hindi) – Skills not courage is what matters preaches the film. How a group of villagers learn the game of cricket to escape taxes is the story and how well it has been told? The scene in which Aamir Khan argues for the inclusion of a lower caste person in the team inspired me the most.

e. Border (Hindi) and Muthina Hara (Kannada) – I think these are the best two films made in India about war. Border brought to life the sheer courage of Indian Soldiers up against a huge Pakistani contingent whereas Muthina Hara amplified the futility of war. I am just in love with the last song of Border, very painful but very true. Muthina Hara should be the best Kannada film made till date but did not achieve the required box office success as is the case with most good films.


Films which captured my imagination

1. Sholay (Hindi) – leave alone the action just raise a toast to the friendship of Jay and Veeru. I can touch my heart and say I was never a friend like Jay to anyone, not even 25%.

2. Broken Arrow (English) – Not much of a story line but the breath taking action and the cool anti-hero character portrayed by Travolta is worth its weight in gold.

3 Cliffhanger (English) – A fantastic film in which Slyvster Stallione, a reclusive mountain rescuer eliminates the villains by his skills and not by his brawn in extreme temperature and high altitude.

4. Anand (Hindi) – How to be happy when death stares in your eyes every now and then? How bad you feel when all your knowledge can’t be of use to save someone you love? A simple story but a saga of human emotions.

5. DDLJ (Hindi) – I am not even an admirer of Shah Rukh Khan but this was one film when you want him to get the girl such was his portrayal of the character. At the end of the film, I was left praying that somehow Kajol gets on to the train. One of the best romantic films (most importantly with a happy ending) made in Indian films. I hate romantic films with a tragic ending.

Films which entertained me

a. Amar Akbar Anthony (Hindi) I have no counts of how many poor mimicry I would have done in my college of the scene in which Amitabh in a drunken state tries to applies tincher to his mirror image. The title track and “My name is Anthony Gonsalves” still rings in my ears.

b. Most Amitabh films (Pre Shahenshah days) entertained me. Possibly the list of films which entertained me are too many to list. After all, I am not one who lands up at a movie for the sake of it.
- August 20, 2008

Email ThisBlogThis!Share to TwitterShare to FacebookShare to Pinterest
Labels: Movies