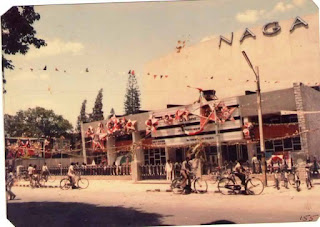 These are the days of swanky multiplexes. Bangalore has/had some great single screens. Here are some of the wonderful single screens of Bangalore which were a part of my growing-up. Those which have ceased to exit have been highlighted in red.

Mukunda: It is located in Maruthisevanagar. It is a middle class theatre which mostly screens regional and sometimes Hindi films. The best film I have seen here is Big B’s “Hera Pheri” and SRK’s ‘Daar”

Ashoka: This was located in Frazer Town. It used to screen Tamil and Hindi films. I don’t remember to have gone to this theatre.

Naga: What a theatre, sirji! This theater was located in St. Johns Road. I really felt bad when this theatre went down. The screen was fabulous so was the parking. I saw the first movie of my life in this theater. I have seen countless films in this theatre and the last was “Rang De Basanti”.

Lavanya : Situated adjacent to Naga, this theater screens only Tamil films. I found nothing special about this theater.

Lakshmi: Situated next to Lakshmi, another of those theatres which screened only Tamil films. This theater had one of the most cramped parking spaces but I remember to have seen some great movies of Kamal Hassan and Rajnikanth.

Shree: This theatre went out of business almost a decade ago. It used to be shut down frequently due to labour problem. They used to screen old Tamil and Hindi films. The best films I have seen are “Namak Halal”, “Yarana (Big B’s)” and a couple of Shivaji Ganesan Movies.

Ajantha : It is a multi lingual theatre. This theater screens Kannada films in the morning show. I was a fan of Vishnuvardhan and seen a lot of his films over here. The one thing I did not like about this theater those days was when there was a hit film very few tickets were sold across the counter.

Lido: This is one more of those theaters which I classify under the “What a theater, sirji!” The single screen does not exist but a multiplex has come up in its place under the brand name “Fame”. Top class theater, screen, audio, snacks bar and a great parking facility. Most of the tickets in this theater got sold in the counter and I am a fan of this theater for this very reason. Any day a movie in Lido, is a pleasure for me. Gandhi is the best film I have seen here as also India’s first 3D film “My Dear Kutty Chatan”.

Symphony (Shankarnag Chitramandira): I have seen numerous English films in this theater. The only thing I don’t like about this theater was the number of steps you had to climb up if you took a balcony ticket because more often than not, the lift here never works.

Blue Moon and Blue Diamond: Wonderful theatres. Both went out of business more than a decade ago and a commercial complex has come up. There used to be a book seller as well as a shop which used to sell Coffee and Samosa. It used one of the favorite hang-out corners for me and my friend when we went to MG Road just to admire the chicks passing by.

Plaza: The best of English films used to be screened here but same cannot be said about the quality of rest rooms of the theater which were awful.

Rex: What a, What a theater, sirji! Hats off to this theater ya in all aspects. I have never seen the tickets of this theater being sold in black.

Galaxy: The interiors of this theater were great but it had an awful parking lot. People used to get into fist fights during getting in and out of the parking lot.

One movie for a family of four in a multiplex could easily mean an expenditure of Rs.1000/- and three movies can easily buy you a DVD player. Everybody talks about piracy and its evil impacts. I am totally against film piracy but piracy cannot be curbed if you put movie viewing beyond the reach of a lower middle class family. The best way to curb piracy is to think about reviving the single screens or come up with budget multiplexes across the country. When we can have an economy class in all spheres of life, why not while viewing films? Everybody loves to go to a movie with their family but not at the cost of food on their plate. This is the message the entire film industry has to understand if they want to curb piracy. Citizens alone are not responsible to curb piracy.