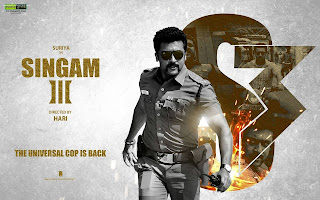 Singham 3 is the first Tamil movie I have seen in Dehradun, and there was a sizeable audience to witness the show.
The movie is the third chapter in the Singham movie series (Tamil) featuring the exploits of larger than life cop, Duraisingam. The first one was memorable, a fresh storyline, great interaction between Surya and Prakash Raj, Vivek comedy, and pacy direction. The second part crossed   my expectations of entertainment. Singham Series is not for those looking out for logic. If you want logic, pick up a book on quantum physics or differential calculus, don’t head for this movie, waste your time, and spoil the minds of those who go to move just for the sake of entertainment, entertainment, and only entertainment. Singham3 is fast, and value for money

The third version operates on a wafer-thin storyline. It suffers mainly due to a poor casting of villains. Did Suman have to play the role of Union Minister? Anybody could have played that insipid role, and why sign up an actor like Suman? It may not come as a surprise that the dumping of e-waste and hospital waste from western countries is actually happening in India and many other Asian countries which have a poor waste disposal regulation, and stringent action against defaulters. European countries are experts in flushing their waste to other countries.

Surya has done justice to his role but his actions in this series seem to be getting repetitive. Imagine a James Bond Movie in which Bond still relies upon the stunts in The Spy Who Loved Me. Though central to the story, the morphed image of lion pouncing has to be curtailed in the coming versions. Less said the better about the two principal Villain characters because neither they look terrifying nor their villainy intimidates anyone. Anushka Shetty is graceful in her presence, though her role is limited. Shruthi is as hot as a furnace, and boy she did give me a sleepless night in the cold environs of Dehradun. Soori’s comedy is passable and incomparable with the epic comedy of Vivek in the first two versions, nor Santhanam in the past version. Neetu Chandra’s item song did trigger my basic instincts. Robo Shankar was passable.

The photography is excellent as is the editing, but same cannot be said of the music. The dialogues and stunts are pale in comparison with the previous two versions. Swach Bharat Andolan has been well integrated into the storyline and in a few places used to evoke the sort of hyper-nationalism the country is getting addicted to.

Creative freedom is permissible, but explain me why would a senior CBI officer coming to investigate the murder case of a Police Commissioner travel by a Train, or are Australian Police so dumb that they would let Surya, whom they accuse of drug smuggling after he shows the Youtube video of Singham 2. The stunts of Surya overtaking a vehicle on his foot, or putting across his jeep to stop a plane is as jarring as jarring can get.


Overall, the movie gets a 6 out of 10, and if there are going to be future versions, some of the hangovers from previous three versions have to be done away with.
- February 15, 2017