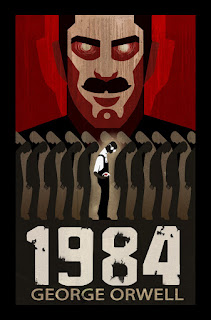 1984 by George Orwell reflects what happens when a society is over charmed by the guiles of a single individual, and false nationalist thoughts. The novel is a must read of all those who believe in democracy yet driven by idol worship and ultra nationalism. It requires one intelligent crook to take over such a democracy and dismantle the democratic institutions. Let us be aware of the fact that democracy is vital to survival of the human race not the infrastructure, the grow rates, the jobs, or any other parameter. 1984 by George Orwell is a wonderful read for anyone whose thoughts begin to veer away from democracy. Presented in the subsequent paragraphs are some thoughts which hit me like a hurricane.

This is what most bigots tell you

WAR IS PEACE
FREEDOM IS SLAVERY
IGNORANCE IS STRENGTH

This does ring a bell…..

Some democracies are headed here….

This was not illegal (nothing was illegal, since there were no longer any laws) but if detected it was reasonably certain that it would be punished by death, or at least by twenty-five years in a forced labour camp.

Either the future would resemble the present, if which case it would not listen to him, or it would be different from it, and his predicament would be meaningless.

There is no shortage of such individuals in certain democracies

It was curious that he seemed not merely to have lost the power of expressing himself but even to have forgotten what it was that he had originally intended to say.

It helps to create a popular enemy for dictators like Big Brother….

Goldstein was the renegade and backslider who once, long ago (how long ago, nobody quite remembered), had been one of the leading figures of the party, almost on a level with Big Brother himself, and then had engaged in counter-revolutionary activities, had been condemned to death, and had mysteriously escaped and disappeared. The programmes of the two minutes hate varied from day to day, but there was none in which Goldstein was not the principal figure. He was the primal traitor, the earliest defiler of the party’s purity.

The obligatory display of patriotism, maybe even for half of the duration…

The horrible thing about the Two Minutes Hate was not that one was obliged to act a part, but, on the contrary, that it was impossible to avoid joining in.

At this moment, the entire group of people broke into a deep, slow, rhythmical chant of `B..B!, `B..B! with a long pause between the first `B’and the second. For perhaps as much as thirty seconds they kept it up. It was a refrain that was often heard in moments of overwhelming emotion.

Have we not heard it before

Thoughtcrime was not a thing that could be concealed for every. You might dodge successfully for a while, even for years, but sooner or later they were bound to get you.

All in the name of progress

WAR IS PEACE
FREEDOM IS SLAVERY
IGNORANCE IS STRENGTH.

Tragedy, he perceived, belonged to the ancient time, to a time when there was still privacy.

Ha, Ha! One day be in bed with the enemy and the next day breathe fire

The enemy of the moment always represented absolute evil, and it followed that any past or future agreement with him was impossible

If the rulers don’t have an illustrious  past, either defame those who have had a glorious past or insert a favourable past for yourself or apportion someone illustrious from the past to the rulers