My Favourite Novel of P G Wodehouse is `The Small Bachelor'

I started reading PG Wodehouse with intent after my second bout of depression in 2010, unaware of Olivia William’s statement, and must say that her statement is as accurate as the law of gravity. I usually highlight interesting portions of any book I read but while reading this particular book, I felt I could highlight the whole book as well.

The one which I found it most addictive was `The Small Bachelor’ written in late 1920’s, and this is what the Master had to say about this book.

I suppose authors generally have a special affection for those of their books which come out easily. The Small Bachelor was one of the easy ones. I wrote most of it in a punt on a lake at a country house in Norfolk with gentle breezes blowing and ducks quacking and all Nature, as you might say, pitching in to make my task more pleasant. 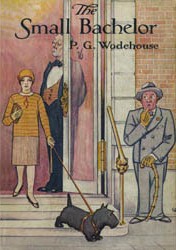 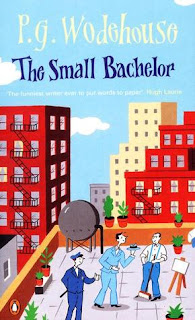 I have, in the following few paragraphs, tried to capture the magic of the book which allured me the most

Here is PGW, taking a possible dig at people of a particular profession staying together

The Sherdian stands in the heart of New York’s Bohemian and artistic quarter. If you threw a brick from any of its windows, you would be certain to brain some rising young interior decorator, some vorticist sculptor or a writer of revolutionary vers libres. And a very good thing, too.

For George, no longer obliged to earn a living, has given his suppressed desires play by coming to the metropolis and trying his hand at painting. From boyhood up he had always wanted to be an artist, and now he is an artist; and what is more, probably the worst artist who ever put brush to canvas.

A swipe at the `Do it yourself’ books authors

I could make a poet out of two sticks and a piece of orange-peel, if they studied my booklet carefully.

Nature, setting out to make a constable, had had a good deal of material left over which she had not liked to throw away but hardly seemed able to fit neatly into the general scheme. He had large, knobby wrists of a geranium hue, and just that extra four or five inches of neck which disqualify a man for high honours in a beauty competition. His eyes were mild and blue and from certain angles he seemed all Adam’s apple.

Steam hammer like persona, only Plum could conjure such phrases

When you met, J Hamilton Beamish, something like a steam-hammer seemed to hit your consciousness and stun it long before he came within speaking distance. In the case of George Finch nothing of this kind happened.

Explaining predicament was never made to sound so funny.

One of the drawbacks to the policeman’s life, Mr Finch, is that it is not easy for him to always to do the gentlemanly thing.

Once bitten, twice shy, explained in the best way possible

If you had been laid up for a year in hospital as the result of jumping off this roof, what would be the one outdoor sport in which, on emerging, you would be most reluctant to indulge? Jumping off roofs, undoubtedly.

Has there been a better description of a hen-pecked husband?

To call him a cipher in the home would be to give a too glowing picture of his importance.

Can a fat person be described better?

Public speakers, when Mrs. Waddington was present had the illusion that they were addressing most of the population of the United States.

Ridiculing hen-pecked husbands at its best

There is no man so terrible in his spasmodic fury as the hen-pecked husband during his short spasms of revolt. Even Mrs Waddington recognized that, no matter how complete her control normally.  Sigsbee H, when having one of the spells, practically amounted to a rogue elephant. Her policy was to keep out of his way till the fever passed, and then to discipline him severly.

PGW has deciphered why some husbands remain hen-pecked

To assert himself with his wife, to bend her to his will, if I may put it that way, a man needs complete financial independence. It is no use trying to bend your wife to your will when five minutes later you have got to try and wheedle twenty five cents out of her for a cigar.

Further reflecting the plight of a hen-pecked husband

Sigsbee H Waddington is one of those men who have only to express a liking for anybody to cause their wives to look on him as something out of the underworld.

Explaining why some people become misogynists

Too many times in his career he had admired girls from afar, only to discover, when they spoke, that they had voices like peacocks calling up the rain.

A useful line for the politicians

A man’s intellectual perceptions do not stand still. One develops.

How can a lover tell such a truth to his girl?

It was as a romantic and penniless artist that George Finch had won this girl’s heart. It would be cruel to reveal the fact that he was rich and the worst artist in New York.


Hamilton Beamish smiled an indulgent smile. These little mistakes could always be corrected later – possibly on the honeymoon.
- April 07, 2017