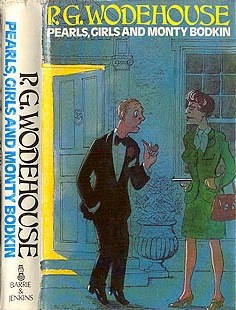 Can a misfit be called a misfit in a more polite way?

In the West End of London – say at the Drones Club in Dover Street, of which he was a popular member- you would have encountered him without surprise. In the executive building of the Superba – Llewellyn, he seemed out of place. You felt he ought not to be there.

A latecomers guide to audacious cover-up

`No earthquakes or other Acts of God?’

`No trouble brewing in the writers kraals? The natives not restless?

One liner to handle the surprises of life

In this world we must be prepared for anybody to say anything.

You too would love to be frustrated after reading this line

Sandy’s exasperation became too much for her. If she had had any more lethal weapon than a small notebook, she would have thrown it at him.

If a mere chronicler in these circumstances has a feeling of bafflement and frustration, as though he had raced to catch a train on Saturday morning and found on arrival at the station that it was Sunday.

At her command he jumps through hoops and snaps lumps of sugar off his nose. He weeps with delight when she gives him a smile and trembles with fear at her frown.

Customs inspectors terrified him, but not nearly so much as she did, and he had good reason for his termors. In her professional days she had been one of the best known panther women on the silver screen, once a panther woman, always a panther woman. So he reached the conclusion that however unpleasant the alternative her wishes would have to be obeyed. But he didn’t like the prospect.


There is no better way to describe these cruel fathers of beautiful girls.

The emotions of a young lover who has planned to lunch with the girl he adores and gets her father instead are more readily imagined than described.


Is this Marital Trust or a Vouching Of The Husband’s timidness?

`He’s on a diet’ said Grace `It was my daughter’s suggestion. And I’m going to see he sticks to it. No alcohol, no starchy foods. So search his room from time to time, and if you find he’s hiding cakes and candy and all that, tell me immediately and I’ll attend to it’.

That’s not the kindest way to describe an individual

Mr Molloy’s resemblance to an American senator of the better sort inspired in those he met, a confidence which was of the greatest help to him in life-work of selling stock in non-existent oil wells.

If only couples took inspiration from Mr and Mrs Molloy

Each respected the other’s Art, which is recognised as being the firmest foundation for a happy marriage. If Soapy Molloy made a killing, nobody could be more eager to celebrate than Dolly, and he was the first to applaud when she returned from an afternoon at the stores with objects that would come in useful about the home.


There is no better way to abash a rival

`Three heads are better than one, even if one of them’s Soapy’s’

`What’s wrong with my head?’ Soapy demanded with some heat.

`Solid Ivory’ said Chimp `And it doesn’t even look nice’


The golden rule for all married men


Married men don’t assert themselves, not if they know what’s good for them.

The golden rule for all men wanting to get married

Never marry anyone who makes conditions, and says she won’t on the dotted line unless you do something or other.

The golden rule for all women wanting to get married

I’ve had too many friend who’ve married Greek gods and spent the rest of their leisure time kicking themselves.

And Indeed Monty had given the wheel a dangerous twiddle, causing a meditative hen which had stepped into the road to take to itself the wings of the dove and disappear over the horizon.

If only all Bosses reposed such confidence in their subordinates

Fire you? I wouldn’t fire you if the President of the United States and his entire Cabinet fell on their knees and begged me to. If this son of a Butterwick thinks he can get to first base with me, he’s very much mistaken `Butterwick’ I shall say to him – after I’ve had my lunch, of course - `You’re a low hound, and you’ve as much chance of wheedling me into giving young Bodkin the pink slip as I have of getting my wife to let me eat a chocolate eclair. Drop dead, Butterwick” I shall say’

For some, being in command is important for some is as much important as it is for a fish to be in water

It added to her gratification that she would now be able to go home. She had found her visit pleasant enough, but she never enjoyed being a guest and having no say in the running of the establishment. It cramped her not to be in command.

Thats’ what they call made for each other, because only one of them, can and gets to do the thinking.

Dolly and Soapy were deep in thought, the former musing on her plan, the latter trying to make a guess of what that plan could be. It was to what virtually amounted to an assembly of waxworks that Grayce re-entered.


You shouldn’t cheat an individual so much!!!

`Talk sense, sweetie. Once seen, never forgotten, that map of yours, so dignified’ said Dolly with touch of wifey pride. `He could pick you out of any police line-up if the had catracts in both eyes’.


Only once in his life had Chimp experienced the thrill these words sent tingling through his weedy little body. That was when he had heard the foreman of the jury say `not guilty’ when he had been expecting to be shipped to Dartmoor for a five-year stay.

Her only hope of avoiding conversation with him would have been to run over him in the car, a step which despite its obvious appeal she thought it would be unwise to take. She did not waiver in the view she had always held that there was no good Chimp but a dead Chimp, but she knew how fussy the police can be about these things.

When you are a hen-pecked husband, and you dare not to get kicked

A stronger man might have offered the suggestion that the thing for her to do was to get out of here and leave him to catch up with his sleep, but Mr Llewllyn, though resentful, was not quite capable of it.

`I don’t want any piece of it. Who does she think I am? One of those dauntless death-defying guys who go into cages at the circus and look murderous man-eating monarchs of the jungle in the eye and make them wilt? I wouldn’t have the nerve to talk to Grayce like that on long-distance telephone. No, sir, not if I was in Paris, France, and she was in Honolulu.’


You can either be a successful business man or an honest one, the choice is yours.

You can’t go by what a man in my position promises. You don’t really suppose, do you, that you can can run a big studio successfully if you go about keeping your promises all the time? If you want me to keep a promise, have me put it in writing and take it to a public notary and get it stamped. And even after that you’ll have my lawyers to deal with.